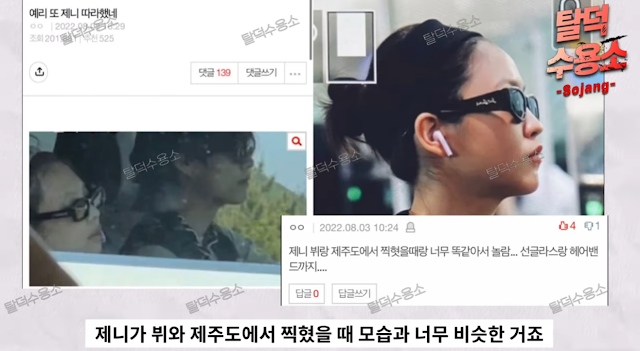 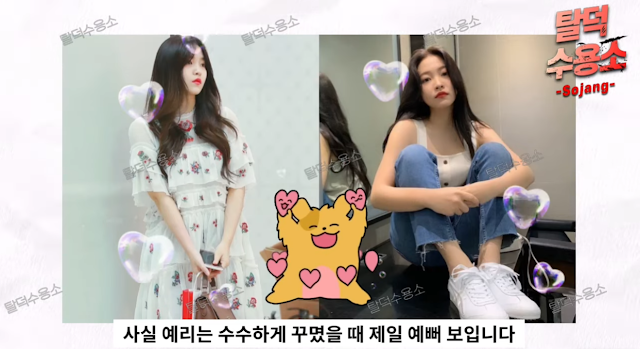 1. [+203] She looks really pretty in the pictures where she’s dressed more simply

2. [+123] Jennie styles herself to fit what she looks good in which makes people copy her but Yeri looks better in a more cutesy style but keeps trying to follow the trends that Jennie leads so it doesn’t fit her that well…

3. [+187] I feel like Yeri would be really successful if she ever got into powerlifting, I’m serious

4. [+81] I really like Yeri but I feel like she doesn’t really know her true style so I feel unfortunate when I see her… she looks much better in cutesy looks… so please come back to that

5. [+40] Yeri looks prettier when she’s dressed in simple looks.. she looks pretty in both styles but definitely better in simpler looks…

7. [+85] She just isn’t able to see herself objectively yet. She’s an idol whose entire look from head to bottom is scrutinized by the public, and without the ability to see yourself objectively, you’re going to end up listening to what third parties say about you and not getting a clear assessment of what works best for you. If only she’d just wear whatever her coordi dresses her in.. or looks up YouTube videos about dressing for her body type. That’d probably be more helpful than what she’s doing now.

8. [+34] I know that everyone has a style that they personally like.. but if she continues dressing in a style that doesn’t match her, it’ll only further highlight her problem areas. That’s why so many idol coordis get hate. Even her own group’s coordi gets hate..

9. [+73] I think I kinda get where she’s coming from.. I remember not liking how youthful I looked so I’d try to dress all mature but I now realize how embarrassing that was. She’ll wake up and realize it herself one day. Doesn’t matter what people say to her in the meantime, she won’t change until she realizes it.

10. [+237] When Yeri first debuted, people thought she was so cute and turtle-like but ever since she started copying Krystal, Jennie, this is where she is… What looks good on her versus what she wants to look like are on such extreme opposite ends that it just makes her look worse.

11. [+60] She can rebel against it all she wants… but what she looks good in is completely different from what she wants to look like.

12. [+222] She’s really stubborn;;; people have been saying for a long time to stop copying other people but she still can’t let go of Jennie…

14. [+32] Yeri peaked during ‘Ice Cream Cake’ and hasn’t been doing much ever since.. can’t sing, always gets her dances wrong, and her visuals have been ruined with the weird styles she’s been dressing herself in

15. [+25] She reminds me of the people in Hongdae who are always trying to look hip… Celebrities who don’t start trends but only follow them have no charm ㅋㅋ