Welcome To The Kingdom: Here’s What Went Down In The Premiere Of “Kingdom: Legendary War” – KpopHit

The long-awaited battle for the kingdom has finally arrived! After winning the prequel competition “Road to Kingdom” last year, THE BOYZ secured themselves a slot in the major leagues. Joining them in the final lineup are BTOB, iKON, SF9, Stray Kids, and ATEEZ. With so much explosive talent in one building, “Kingdom: Legendary War” can only be nothing but entertaining. And the premiere on April 1 proved it to be very much so. 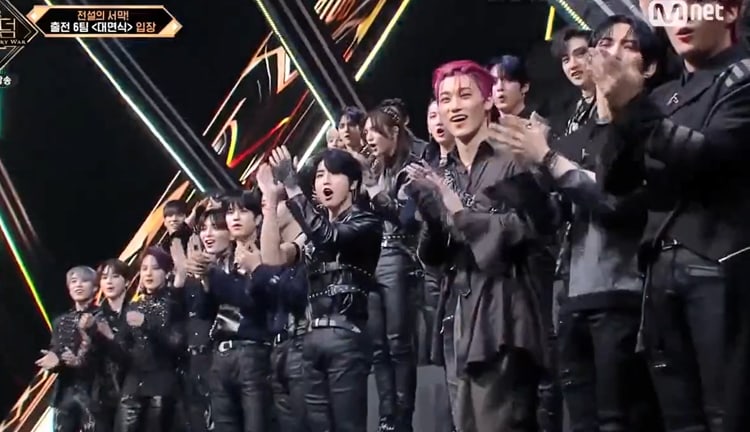 Want to know what happened in this first episode? Read on and find out.

Warning: You’re literally going to find out what happened. So… spoilers!

Welcome to the Kingdom

The episode started off with the winners of “Road To Kingdom,” THE BOYZ, stepping onto the battleground. Coincidentally (or intentionally), they were sitting in the same seats as they did in the prequel competition. Following them were Stray Kids and ATEEZ, the latter who also happens to be the maknae (youngest) team. The teams all looked pretty nervous and awkward around each post-initial introduction, and silence lingered in the air. 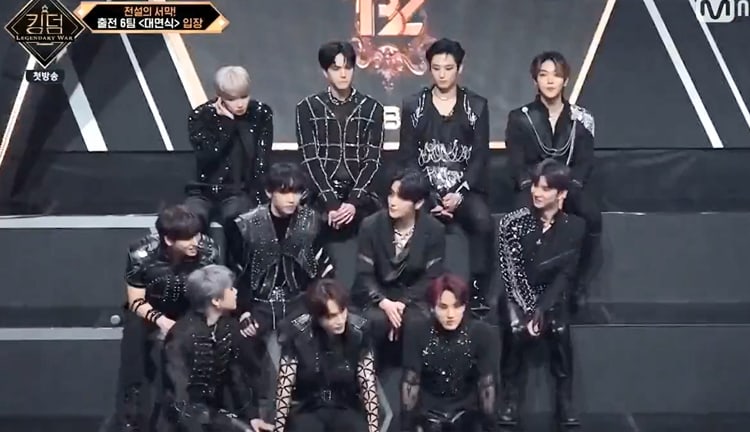 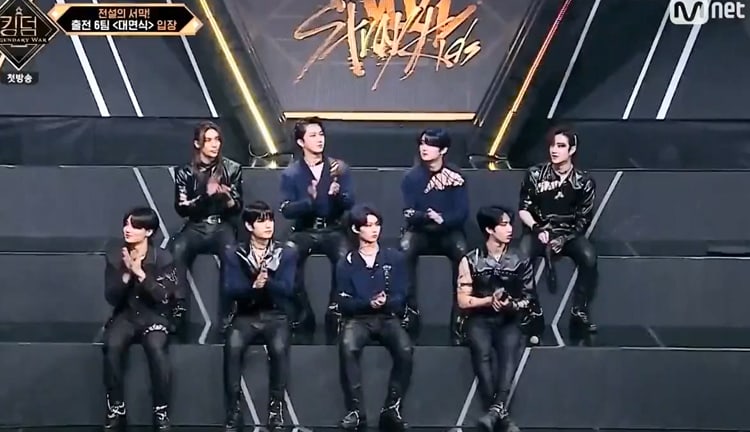 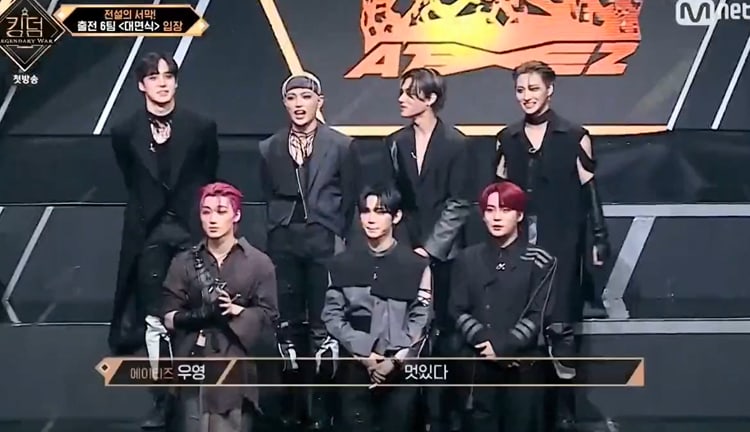 Just as I was thinking that they need some icebreakers like BTOB, in walked BTOB, who are also the most senior group of the six. To give you an idea, there’s about an 11-year gap between the youngest in Stray Kids and the oldest in BTOB. Eunkwang also randomly started trying to converse in English with Stray Kids’ Bang Chan. It was all very silly, and it successfully lightened the mood. 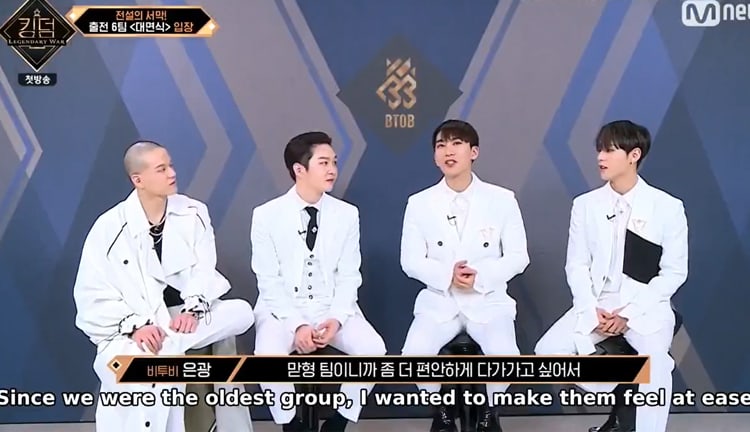 Next up was SF9, who looked like a bunch of models striding in, and iKON, the group which most of the boys were looking forward to. 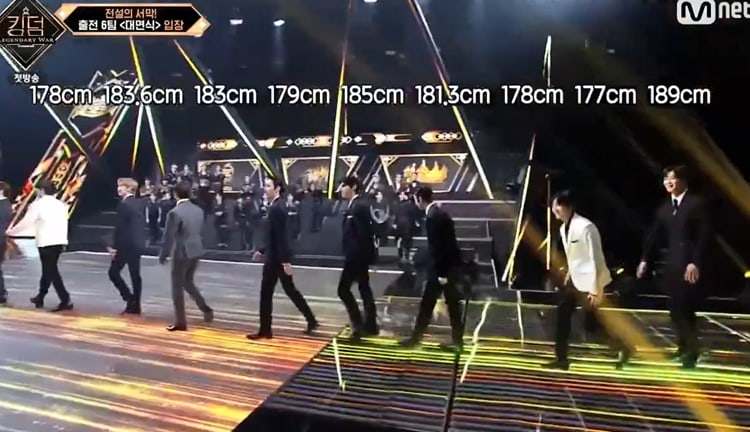 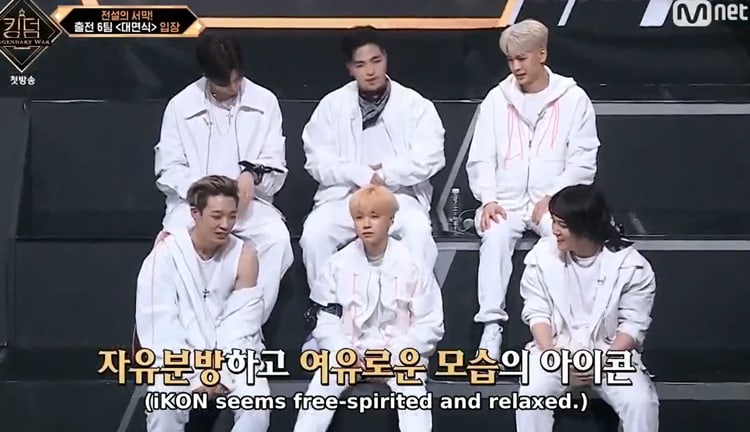 LOL at SF9 bowing to BTOB.

Here’s how the game is played

The cherry on top of the very large pie chock-full of talent is none other than the MCs, TVXQ. TVXQ is a huge part of the Hallyu wave and will soon be approaching their 20th anniversary, which makes them major sunbaes (seniors) to all the groups. Having Changmin and Yunho around and giving the younger teams affirmation will no doubt be a morale booster (though Yunho has since pulled out of the show). 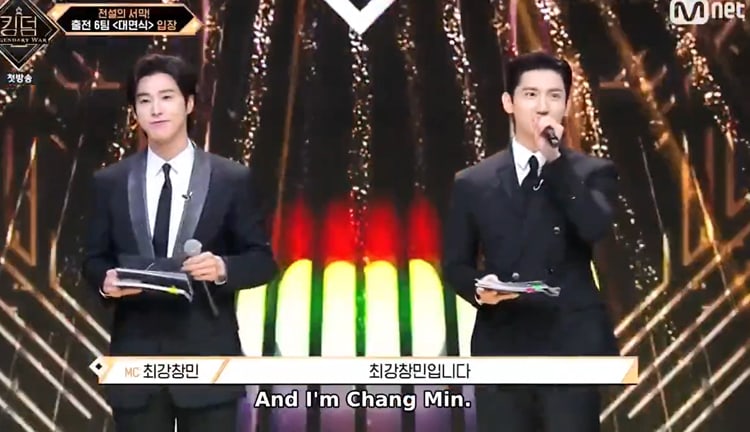 The MCs explained the rules for the show. There will be four rounds in total (excluding the Introduction Stage), of which the fourth will be the live finale. The points system is made up of group evaluations (25 percent), expert evaluations (25 percent), domestic and global fan votes (40 percent), and views on streaming platforms (10 percent). The winner with the highest cumulative score across all rounds will be crowned the winner, with a prize of a special performance show and the group’s own variety show. Oh, and there also won’t be any eliminations, so we can enjoy all six groups for the whole length of the show. Yay!

This very first performance is the Introduction Stage, where each group has 100 seconds to perform a reinterpretation of one of their songs that won on a music show. The winner of this will gain 1,000 benefit points that will go towards their cumulative score, and they will also be able to decide the performance sequence for the first round.

As for the order of the Introduction Stage, it is done in a relay style, i.e. each group picks who goes next. Beforehand, they had voted amongst themselves to see which group would most likely win this whole competition, and iKON came in first. Thus, the group was given the most coveted ending spot, and they in turn chose the youngest group, ATEEZ, to kick off the show. 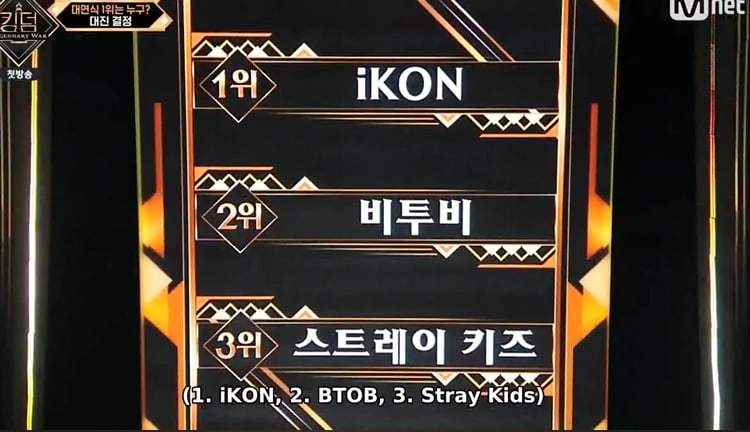 Though iKON did say they apologized to them backstage for picking them to go first, this was actually a good idea. As they debuted the latest, ATEEZ is obviously the least experienced of the six groups, so allowing them to go first meant that they wouldn’t be intimidated after watching the others perform. We saw footage of their rehearsal which didn’t go so well because of the multiple formation changes, but during the actual performance, they performed beautifully. It was a dynamic opening stage with a cool pirate theme, and ATEEZ really set the mood for the night.

ATEEZ chose BTOB to perform next. Again, this is a good strategy because BTOB could be considered arguably less “flashy” than the groups, and BTOB themselves expected as much. In their confessionals, they agreed that they weren’t quite like the other groups, but they were going to play to their strengths and deliver concert-like performances each time. Minhyuk in particular was most eager to join the show, wanting to give something like this a try before they got any older. (This is actually their first ever survival show). The quartet performed a choir version of “Beautiful Pain,” and it was everything you would expect from BTOB — beautiful, powerful, heart-tugging vocals. Hyunsik and Sungjae may need to worry a little about their BTOB-BLUE spots!

Going up after BTOB was SF9, minus Rowoon who was experiencing back pain. “Good Guy” is the song that gave them their first win and is a very important song to them. It was one that they had a lot of input on, so for it to have done well on the charts gave them much needed confidence. The group also mentioned wanting to show everyone what they as a group are capable of since most of them branched out into solo activities fairly early on in their career and are more often known for that. While there was a tiny hiccup in the performance where Taeyang’s mic pack fell off (it fell off during the rehearsal too), he was commended for not being flustered and staying laser focused on his performance.

SF9 chose Stray Kids to perform next, their reasoning being that they didn’t want THE BOYZ to go up right after them. Immediately, we were shown Felix looking very worried. He had made consecutive mistakes during rehearsal, and when you see the performance, it’s easy to understand why. The moves are all so interconnected that one wrong move causes a domino effect of mistakes. But thankfully, their actual performance went off flawlessly. It was such a spectacle, it felt like an end-of-the-year awards show performance. There was even a flamethrower-esque thing at one point! They definitely went all out and turned in one show-stopping performance.

THE BOYZ (performing “The Stealer”)

Next up was THE BOYZ, performing “The Stealer” which was one of their releases post “Road to Kingdom.” They similarly had rehearsal woes where Juyeon wasn’t able to stick his landing, and the show proceeded to show clips of him being quite unlucky during the prequel competition too. But again, their worries were for naught because the actual performance proved them worthy of the title of RTK winners. The whole thing was like a piece of art, beautifully executed and visually gorgeous. The song itself is very dynamic too, going from high-intensity beats to melodious lines, and it allowed the group to show different sides of themselves in the short span of 100 seconds.

Last but not certainly not least, we have iKON. The group has arguably the most impressive resume out of all the groups, having not only the most music show wins but also having joined the most amount of survival programs. (This is their fourth overall, and for Bobby personally, it’s the fifth.) They delved back into their hip hop roots and delivered a witty, dance-heavy performance of “RHYTHM TA.” The ease and swagger they showed was really something that comes from experience and just made it all the more fun to watch. Everyone was clearly amazed by seeing them perform up close, and it’s easy to understand why they were voted most likely to win.

The performance videos were uploaded right away. The voting period was only supposed to be for an hour, but was extended to four days. (It was open from February 23 to 27). Thus the groups were sent back, and then they reconvened days later in their respective spaces to watch the announcement of the results.

There were 3.3 million votes in total (each voter could vote for three teams, so there were 1.1 million voters overall).

In fifth place, with approximately 500 thousand votes, was ATEEZ. They were a little disappointed with their placement but were even more determined to fight harder in the next round.

In fourth place, with approximately 530 thousand votes, was SF9. They had been worried that the global fans wouldn’t respond well to their song choice because they had never performed it overseas before, so they were very happy with their ranking.

Side note: Cue both iKON and BTOB freaking out over potentially placing in sixth place:

Coming in third, with around 540 thousand votes, is a very delighted BTOB. Changsub literally melted and slid onto the ground with relief. 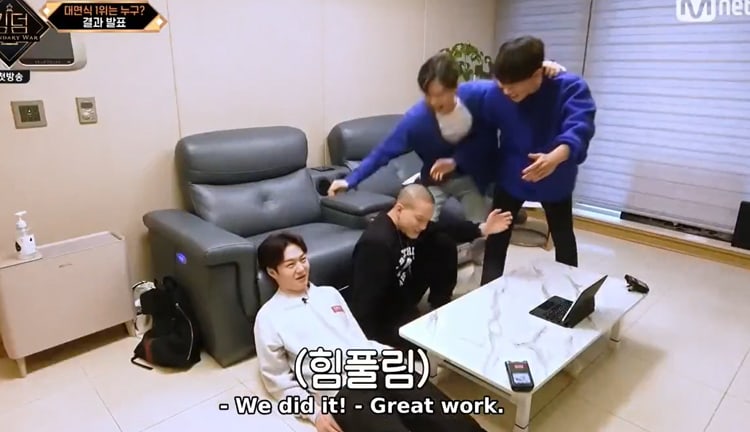 In sixth place is… to be continued! *shakes fist* The other three rankings will be announced next week.

Overall, this first week of performances delivered, and each group successfully showed off their own personal color. In the preview for next week, the theme “To The World” looks downright amazing. I’m also looking forward to the potential collaboration week and other interesting themes that may be ahead!

Which of the performances was your favorite? And which theme do you want to see in the coming weeks? Let us know in the comments below.

Belinda_C is excited for all the performances to come! Talk dramas, SEVENTEEN, and Shinhwa with her on Twitter!