The hit online concert of different artists at the UNIVERSE app, UNI-KON, is now made available as a video on demand (VOD) content on the fan interaction platform.

Last April 5, NCSoft and Klap made the announcement about its first-ever online concert, which excited and entertained 2.6 million K-Pop fans around the world last February 14, will be uploading the UNI-KON event as a VOD content available for anyone to watch it whenever, wherever, through the UNIVERSE app.

Additionally, the developers behind the K-pop fan interaction platform will also include photos of the event, behind-the-scenes clips, and fancams in addition to the full video of the event. 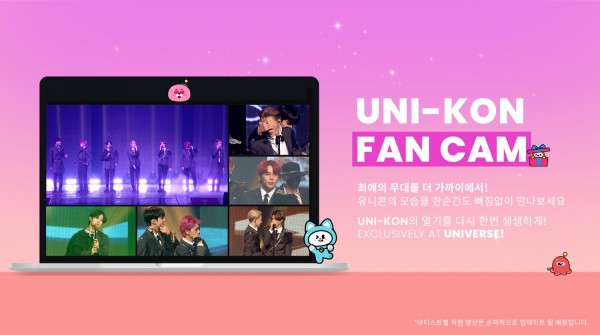 To begin its collection of on-demand content, UNIVERSE has already begun with the release of IZ*ONE clips since March 28. Additionally, they have released the music video for “D-D-Dance,” which was IZ*ONE’s latest single and the first song under UNIVERSE Music, which are original songs created and performed by artists exclusively for their fans on the K-pop interaction platform. Also, IZ*ONE’s online fan party, among the first events on the platform, is now also available on-demand for WIZ*ONEs around the world.

NCSoft and Klap also announced that the on-demand content from the UNI-KON would include all 14 artists who performed at the event – Kang Daniel, Park Ji Hoon. MONSTA X, ASTRO, The Boyz, ATEEZ, CRAVITY, AB6IX, CIX, WEi, Oh My Girl, WJSN, IZ*ONE, and (G)I-DLE.

Among these groups, the first eleven already had their own PLANET within the UNIVERSE platform where they share updates and go on activities with their respective fanbases. The last three – OH MY GIRL, WEi, and CRAVITY – are set to have their own PLANET soon, according to a recent announcement.

The artist-exclusive fan cams are made available to give fans a more intimate experience with their favorite idols and to allow them to relive the fun and excitement they had when the online concert was first held. Fans who missed it the first time can still watch UNI-KON simply by signing up for the UNIVERSE app, purchasing the VOD content among the “LOVE” goods within the app.

Aside from the new VOD content made available on the UNIVERSE platform, the NCSoft and Klap fan interaction platform has already launched its UNIVERSE Original series – which are original web series featuring the artists on the platform. Some of the series now available on the app include ATEEZ’s “Pirate Reboot: The Five Treasures” and WJSN’s “The Secret of the Grand Mansion: The Missing Girls.”