Park Jihoon will be greeting his fans all around the world through an online concert before the year ends.

On Nov. 26, a photo was shared via the South Korean soloist’s official Twitter account. The picture reveals that the singer will hold an online concert, “2020 PARK JIHOON ONLINE CONCERT MESSAGE,” and it will take place on Dec. 13 at 7:00 p.m. KST.

The upcoming online concert follows Park Jihoon’s first studio album, “Message,” which was out on Nov. 4. Hence, the artist is expected to deliver the tracks included in the said album. All the singer’s singles that have been launched so far, starting from his debut, will also be sung at the event. 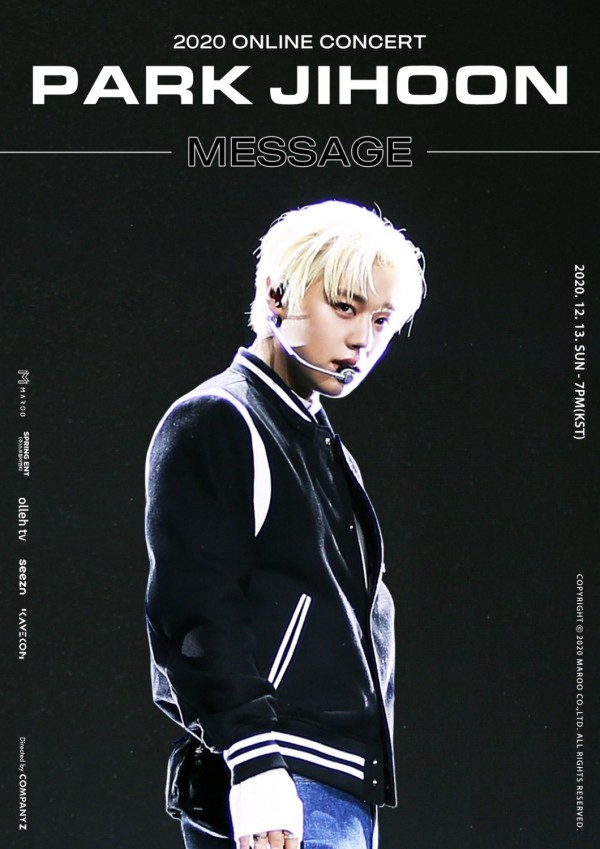 In addition, the concert will be broadcast live across the globe. Domestic fans will be able to watch via KT Corporation’s Olleh TV and Seezn, while international fans can view it through KAVECON.

This will be Park Jihoon’s very first online concert as well as his first-ever solo concert. An official from the idol’s management agency stated that Park could grow further as an artist throughout the years as he continues to give breathtaking performances and special stages. The staff added that the soloist will be showing off a new appearance of himself through the event.

Park Jihoon is a singer and actor in South Korea. He is best known for his participation in Mnet’s reality competition show “Produce 101 Season 2.” In the program, he finished in second place. So he was given a chance to debut as a member of the project boy group WANNA ONE in August 2017 under YMC Entertainment. The band released its first extended play, “1×1=1 (To Be One),” the following day.

In November 2017, WANNA ONE launched its repackaged album “1-1=0 (Nothing Without You). With the collective sales of the first album and its repackaged edition, the group became the third Korean act whose debut album sold a million copies, and the first band to achieve the feat after 25 years since Seo Taiji and Boys in 1992.

Since their debut, WANNA ONE released numerous albums and singles topping music charts in different countries. The boy group officially disbanded on Dec. 31, 2018, but their last activity was with their four-day concert series “Therefore” from Jan. 24 to 27, 2018, at Gocheok SkyDome.

In March 2019, Park Jihoon made his debut as a solo artist with the extended play “O’Clock” with the lead single “L.O.V.E.” He was able to earn his very first solo music-show win on KBS’s Music Bank a month after. In December of the same year, his second EP “360” was launched, and five months later, he made a comeback with his third EP “The W.”

Aside from singing, the solo artist also challenged himself in acting. He was cast in JTBC’s historical drama “Flower Crew: Joseon Marriage Agency” in April 2019. Because of his excellent acting skills, he was the talk of the town for eight weeks in a row while the drama aired for two months.

Also, Park Jihoon starred as the male lead named Gong Juyeong in the Kakao M’s Digital Drama, which is an adaptation of “Love Revolution,” a well-known webtoon.

Watch the MV for Park Jihoon’s “Gotcha” below!

WINNER’s Seungyoon Believes BTS’s “Blood, Sweat, And Tears” Has A Special Message For Their Fans – KpopHit