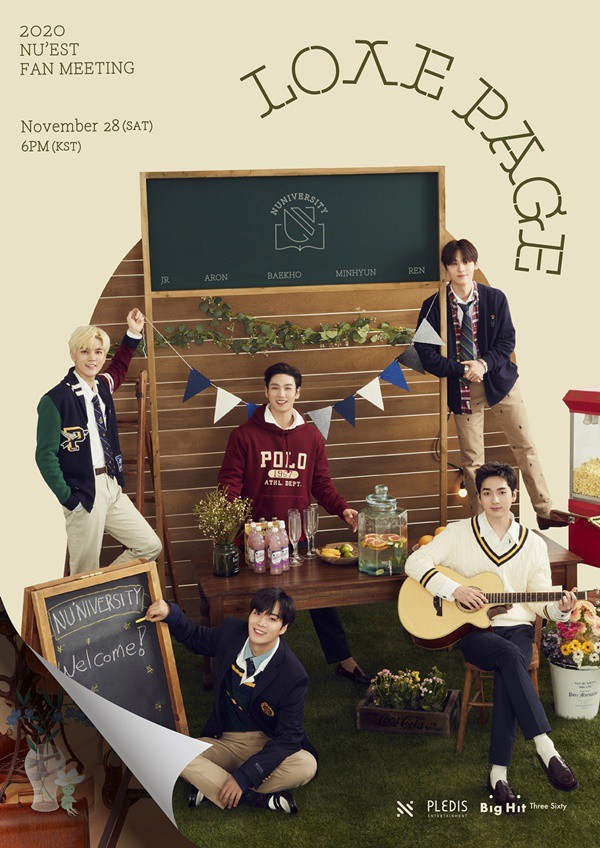 Popular boy group NU’EST is going to be holding an online fan meeting in November.

On the 16th at noon on NU’EST’s official SNS, the agency Pledis Entertainment surprised fans with news of this fan meeting titled, “2020 NU’EST FAN MEETING’LOΛ.E PAGE’, which is scheduled to be broadcast live on November 28th.

In the poster, NU’EST captures fans’ attention with a schoolboy look that captures the warmth of autumn and perfect visual as if it came out of a manhwa. This raises expectations about what kind of stage NU’EST will show through this ‘Love Page’ show.

This fan meeting, which is about to be held at the end of November, will be held with the concept of inviting the fan club “LOΛ.E” (Love) to a university festival called “New University.” NU’EST, which has attracted fans from all over the world by preparing a different stage and corner at every fan meeting with their usual love of fans, is preparing an exceptional stage that can only be seen on the “Love Page” event this time.

Seven months after their last comeback, the group released their eighth EP, The Nocturne, with the title track “I’m in Trouble” on May 11. The album topped the Album Sales, Retail Album, Download, and BGM charts on Gaon’s Weekly Chart. “I’m in Trouble” also debuted at no. 6 on Gaon’s Digital Chart, becoming the complete group’s first title track since debut to break into the Top 10, excluding their singles as NU’EST W.