Mokkoji Korea, a global Korean cultural event, has chosen the Philippines to be its “Focus Country,” dedicating the entire month for sharing culture between the two nations and a lineup of exclusive events for Hallyu fans in its Southeast Asian neighbor. 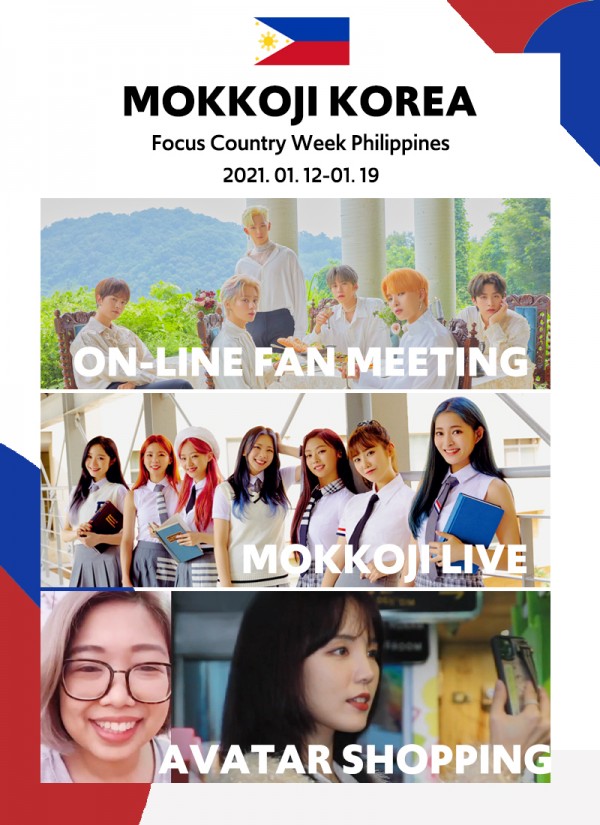 Starting on January 12, Mokkoji Korea kicked off its month-long focus with the “Mokkoji Live” featuring RBW Entertainment boy group ONEUS to ask their Filipino fans which K-Dramas they loved, with its members Ravn, Seoho, Leedo, Keonhee, Hwanwoong, and Xion attempting to recreate the scenes from those shows.

Additionally, during the ONEUS live meeting, the group members chose 50 local fans via video chat. These fans got the chance to share with the boy group their “Tourist Sites in Korea I’d Like to Visit After Covid-19,” introducing locations made popular by Korean films and series. In return, the chosen Filipino fans also recommended places in the Phillippines for the K-Pop idols.

By next week, January 19, it will be C9 Entertainment’s CIGNATURE who will be introducing fun content found in Korean and Filipino elementary textbooks, providing a new avenue for understanding both cultures.

RELATED ARTICLE: These Are The 20 Most Popular Girl Groups for The Month of September

Further espousing its vision of “Enjoying Hallyu with K-Lifestyle” all over the world, Mokkoji Korea has already revealed its last guest: K-Pop legends Super Junior, set to make an appearance on the 26th. Their “Mokkoji Live” episode will also serve as the culmination of the three-month online festival celebrating Korean culture and all the fans that helped shape the global phenomenon.

Mokkoji Korea is hosted by the Ministry of Culture, Sports and Tourism (MCST) and organized by the Korean Foundation for International Cultural Exchange (KOFICE). It aims to offer a platform from South Korea to the rest of the world, appreciating and giving back to Hallyu fans through cultural shows, lifestyle exhibitions, and even a goods market.

“Mokkoji” is a Korean term that loosely translates to “getting together and having a feast,” which was its vision for Hallyu artists and fans everywhere. Mokkoji Korea, which started late last year, has become a gathering place for fan interaction, giving back to the fans who have offered their love and support all these years.

The remaining program can be found at the Mokkoji Korea Official Website.