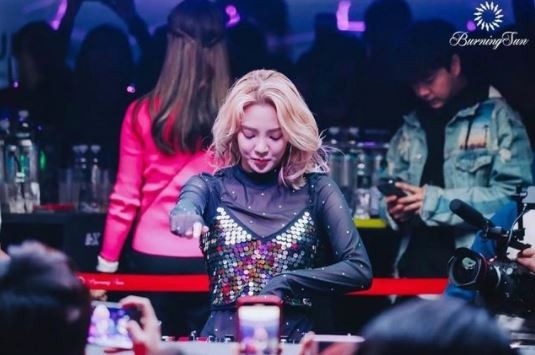 Kim Sang Kyo, the first person to report the ‘Burning Sun’ scandal, made an additional post calling out SNSD’s Hyoyeon along with her picture. “Let me ask one thing. Who exactly was the actress who was so high on drugs that she was drooling that policemen XX and XX weren’t allowed inside? Hyoyeon-ah, you were the VVIP of the night, so I’m sure you were able to see it all, right? You should’ve seen whether the high actress was H or G, or whether the man who beat me while high was Seungri’s friend or not. Start talking, you don’t have much time left…”

1. [+190, -58] At the time, Hyoyeon left Burning Sun immediately after her performance on the night of the 23rd. What’s funny is that he’s willing to name Hyoyeon when she hasn’t done anything while he’s using initials for the two actress names that he already revealed before and was found to be someone else. He’s making it sound like Hyoyeon did something bad.

2. [+61, -1] Why kick up all this fuss with her? She wasn’t there at the scene. She was just there as a DJ. She did her job and went home, what is she supposed to know? Stop trying to use her fame and just come out with the name of the actress.

3. [+55, -4] Hyoyeon was invited to perform as a DJ that night and has nothing to do with Kim Sang Kyo’s case. CCTV has already shown that she did her gig and left long before the scandal occurred. Claiming that she would know anything that went on that night is just grasping at her fame for your own gain. The name of the actress going around has already claimed that it wasn’t her and threatened to sue.

5. [+34, -6] This man needs to stop. Just come out with the two actress names, why shove all of this on the DJ of the night who wasn’t even a witness to the crime?

6. [+25, -5] Hyoyeon was only the DJ that night, nothing else. All Kim Sang Kyo-ssi has to do is reveal what he knows about the actress, why stay hush??

7. [+14, -3] Why demand all this from a kid who was only at the club to play some music? Go after the people who actually commit the crime while listening to that music.