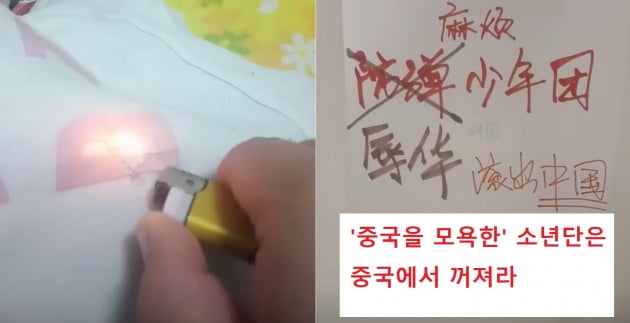 1. [+12,272, -660] MacArthur was right, a bomb should’ve been dropped on China. And yet not a word from our China Moon Jae In who’s always trying to ride on BTS’ coattails otherwise.

2. [+8,636, -53] Does China think the only country that participated in the 6.25 war was the US? 16 countries joined with medical help from five countries. Does China really want us to unearth all the history and take a hard look at it? Go back and learn your own history right, tsk tsk tsk.

4. [+4,130, -359] We need to start a boycott even stronger than the ‘No Japan’ movement, though I doubt consumers who are already used to cheap trash will be willing participants

6. [+1,386, -3] This is a good example of why the world is ostracizing China. They act like their freedom of expression is just and all the other countries are wrong.

7. [+777, -7] They’re the ones getting history wrong and getting angry over it… BTS never even said the ‘ch’ in China’. China’s the one who joined the 625 war to help the North and kill our soldiers and our people. Why should we be grateful to them for that??? I guess I should feel bad for the Chinese in the end since they’re censored to the point where they have no freedom. They should go back and learn their own history right.

9. [+608, -1] Hey, Chinazis. We’re South Korean, not North. Get your history straight because you’re basically asking the South to be grateful towards your help to the North in killing our people. In what country have you ever seen its own people express gratitude towards their enemy and not their allies? I understand that you guys have been abusing your power thanks to your wealth but this is exactly the type of behavior I’d expect from the country that developed the virus.

10. [+599, -7] Never forget. Japan may have been our enemy for decades but it’s actually China who have oppressed us for thousands of years.