Make way for the fashion king! 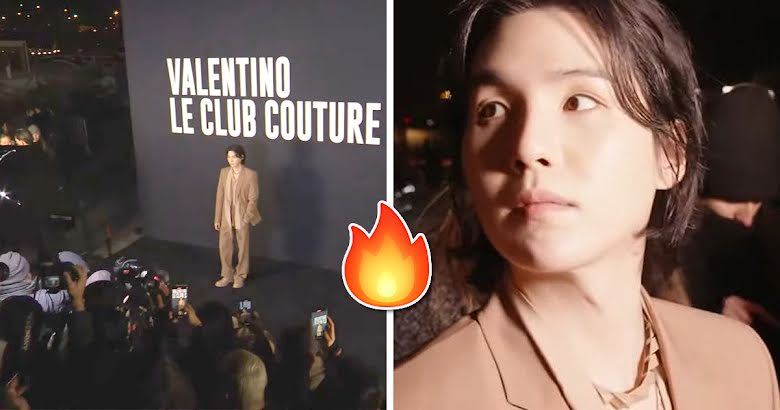 BTS‘s Jimin recently made his debut as Dior‘s global brand ambassador at Paris Fashion Week. Now, Suga is stepping onto the scene!

He is a multi-faceted artist, an interpreter who uses his talent and work to express himself with energy and authenticity. He perfectly embodies everything that DI.VA.s testimonials stand for diversity, inclusivity, creativity, and passion.

Today, Suga arrived at Paris Fashion Week to attend Valentino’s couture show. He made his grand entrance to the sound of camera shutters and deafening cheers, dressed in head-to-toe beige from Valentino’s 2023 Spring/Summer Ready-to-Wear Collection.

Like yoongi knows how we will go crazy after this…. He is beautiful without even trying…. Like he is naturally posing but look at him….. Looking like an angel…. Fallen directly from the heaven pic.twitter.com/tt7CMhNWus

As photographers and fans clamored for this attention, Suga effortlessly kept his cool while radiating “main character” energy.

OH MY GOD 😭 YOONGI IS SO BREATHTAKINGLY BEAUTIFULpic.twitter.com/rzBok98Ooy

Within minutes of his arrival, photos, videos, and the trending phrase “Min Yoongi” took over Twitter, flooding ARMY’s feeds — and it’s easy to see why!

For more, read all about Jimin’s arrival here: