Did you catch the popular Disney movie ‘Aladdin’ when it was released?

It looks like the renown choreographer for ‘Aladdin’, Nicky Andersen, had teased fans about his new project which he was currently working on.

Through his Instagram story, he had previously uploaded a picture with BTS
‘s JiMin solo track ‘Filter’. Looking at how he had added the hashtag ‘work’, it suggested that the might be working on a choreography for the song. 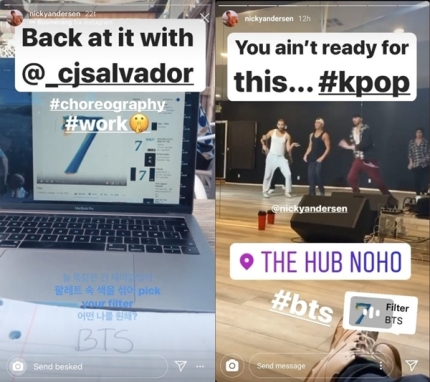 It had caused many BTS’s fans, ARMY, to wonder if he will be choreographing the dance for the track.

For those who had yet to listen to ‘Filter’, you can give it a listen below.

‘Filter’ has Latin vibes and some ARMY had also mentioned that the track also gives off a sexy feeling which they thought Nicky Andersen is the best candidate as the choreographer. They believe through his work, JiMin will be able to express the message of the song even more thanks to his talented dancing skills.

Previously, BTS had returned with their 4th full length album “MAP OF THE SOUL : 7” and ‘Filter’ is one of the tracks in the album.

Are you also curious to see if JiMin will be releasing a performance video with ‘Filter’ soon?

Oh My Girls’ Personally Signed Album Given To Lovelyz Found On...