The Gaon Chart Music Awards for this year was held at the CJ E&M Center and was hosted by Super Junior’s Leeteuk and ITZY’s Lia. While the event was shown live in South Korea via Mnet starting at 7:00 p.m. Korean Standard Time (KST), Amazer brought the prestige and the tension of the awards ceremony to global K-Pop fans on January 13, 7:00 p.m. Pacific Standard Time (PST).

The decision came since simultaneous broadcast between Korea and the Americas would mean K-Pop fans in the United States, and Central and South America would have to stay tuned from 2:00 a.m. to 7:00 a.m. in their region.

Aside from moving the 10th Gaon Music Awards broadcast to a more accessible timeslot, Amazer will also be providing English subtitles to make sure everyone captures the announcements and of course, everything their favorite idols have to say.

Amazer also shared that aside from their app (free of charge!), the Gaon Chart Music Awards was also made available through the Gaon Chart’s YouTube Channel. 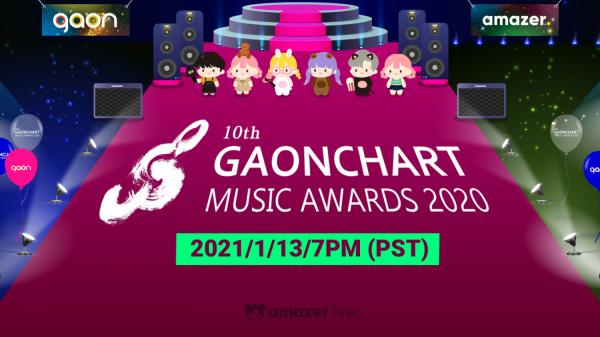 Amazer: Bringing K-Pop to the World

Most users of the Amazer app are from North and Latin American users, accounting for almost 96 percent of its overseas users. It further justifies the schedule adjustment made for the music awards broadcast: making sure that more people get to see the prestigious K-Pop awards event.

Fans can further enjoy watching the 10th Gaon Chart Music Awards while using their customized avatars and accessories exclusive to the app. They can also share their comments with their fellow fans as they learn whether their favorite idols will be receiving this year’s top awards.

Originally known as the Gaon Chart K-Pop Awards, the major music awards show is an annual event hosted by Gaon Music Charts – the country’s national music record chart monitors. Its first incarnation was held back in 2011, with the awards ceremony being held on February 22, 2012 at the Blue Square Samsung Card Hall in Seoul, South Korea. It was hosted by SNSD’s Taeyeon and singer-songwriter Joo Young-hoon.

Among the winners announced are Artists of the Year – both for digital and physical sales records – as well as Rookie Awards, Hot Performance of the Year, and Top Kit Seller of the Year awards.